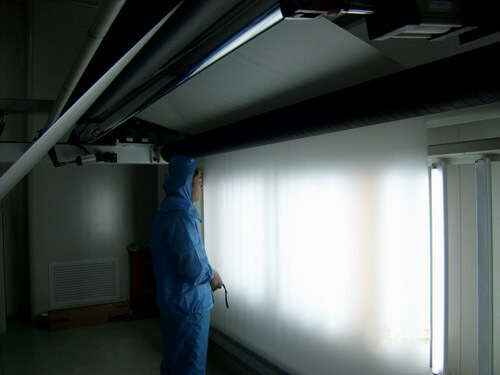 PVB film is one of the most popular interlayer used for glass lamination. PVB stands for polyvinyl butyral. Laminated glass, commonly used in the automotive and architectural fields, comprises a protective interlayer, usually PVB, bonded between two panels of glass. The bonding process takes place under heat and pressure. When laminated under these conditions, the PVB interlayer becomes optically clear and binds the two panes of glass together. Once sealed together, the glass “sandwich” (i.e., laminate) behaves as a single unit and looks like normal glass. The polymer interlayer of PVB is tough and ductile, so brittle cracks will not pass from one side of the laminate to the other. PVB interlayer can be purchased in colored sheets, such as for the blue or green “shade band” at the top edge of many automobile windshields. PVB interlayers can also be purchased in different colors for architectural laminated glass manufacture. PVB has gained acceptance among manufacturers of photovoltaic thin film solar modules. The photovoltaic circuit is formed on a sheet of glass using thin film deposition and patterning techniques. PVB and a second sheet of glass (called back glass) are then placed directly on the circuit. The lamination of this sandwich encapsulates the circuit, protecting it from the environment. Current is extracted from the module at a sealed terminal box that is attached to the circuit through a hole in the back glass.